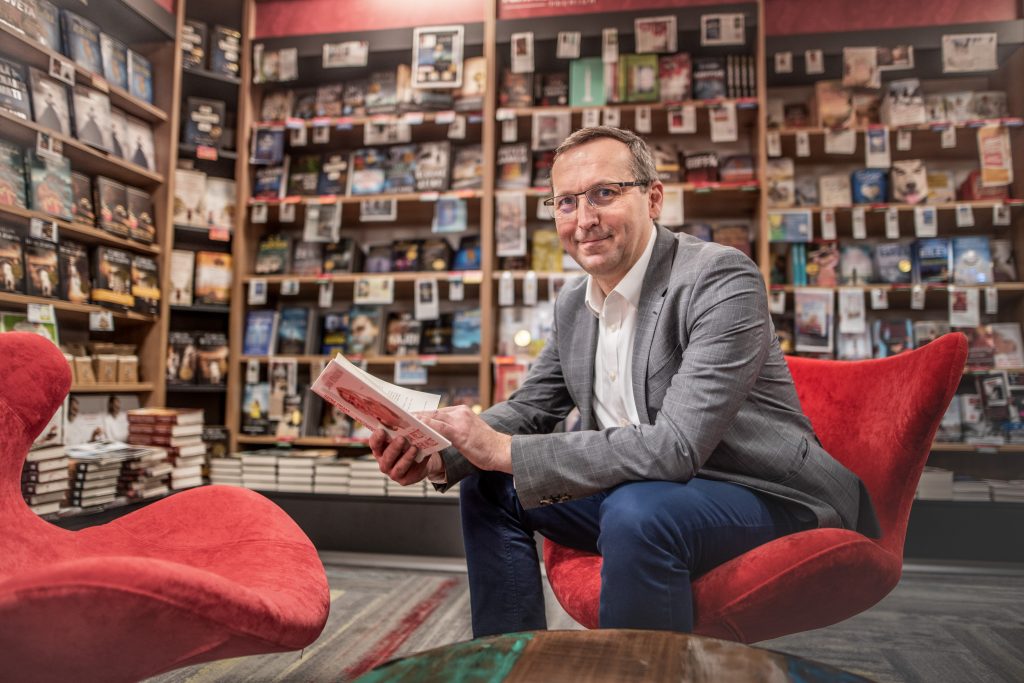 Prior to entering the book business, he spent 20 years managing teams for mobile operators. And even though he started out in finance, he gradually ran an entire number of key departments, including marketing and customer care – which is perhaps also why you can feel a clear focus on customer satisfaction in practically everything he does. He often mentions the need to understand and listen, and prior to making a decision and starting to cut, he first measures everything carefully three times. But spontaneity and an adventurous spirit don’t necessarily rule out an analytical nature – otherwise, František Mala, the new CEO of Euromedia Group, would never have decided to move with his family to Romania for a few years.

What key thing has 2020 taught you?
I think that the crisis taught people that even things they had relied on can change. That things we thought were stable and unchanging could suddenly not be there anymore. For some, last year’s changes were literally dramatic ones. As for me, 2020 found me still in the mobile business, which didn’t have to close shops and the importance of telco services increased in customers’ eyes. So, for me the greatest change is one I caused myself – but that makes it that much bigger, because I came over to run the Euromedia Group, a book business that has been significantly impacted by the pandemic.

For me, personally, one of the main take-aways from similar situations is thus the importance of internal configuration, personal stability, which is based on good self-awareness and realizing what’s important for me – and of course on the support of one’s friends and family. I’m convinced that if you look at the big picture and with a certain amount of detachment, you think more rationally. If you keep your cool, you’re able to better discern what you can change now, what you should change gradually, and what you have to accept.

Of course, that’s easier to say in my position – if I owned a chain of restaurants, I’d have a harder time looking at the big picture, and I’d probably talk differently. But at Euromedia it’s also a constant struggle between plans and reality, because we assumed that stores would be open by now, and so every day our situation is a little more complicated. But some unexpected circumstance always appears that shuffles the deck, you just have to expect that. You don’t know what it will involve, but it will occur differently that you had planned.

What is the number-one rule that you follow at all costs in your business?
I’m the type of guy who doesn’t arrive with great fanfare, I tend to introduce changes gradually and consistently. That’s why I think that what’s key is to not give up when the first failure comes along, and to keep pursuing your vision with a healthy dose of persistence.

Not everything you come up with gets applause right away. At the beginning, when the positive effect isn’t very visible yet, it’s important to have the internal strength to pursue your vision. It’s only in your head for the time being, and it will take time for others to see it. It’s a period you have to deal with on your own – because everyone has lots of advice and opinions, but the vision is only in my head. During this time, it’s necessary to communicate and convince others that it’s a good one.

In practise, not every day works out ideally. For me, it’s useful to literally sleep on it and start the next day anew. Every success is composed of many small battles that you need to win every day. 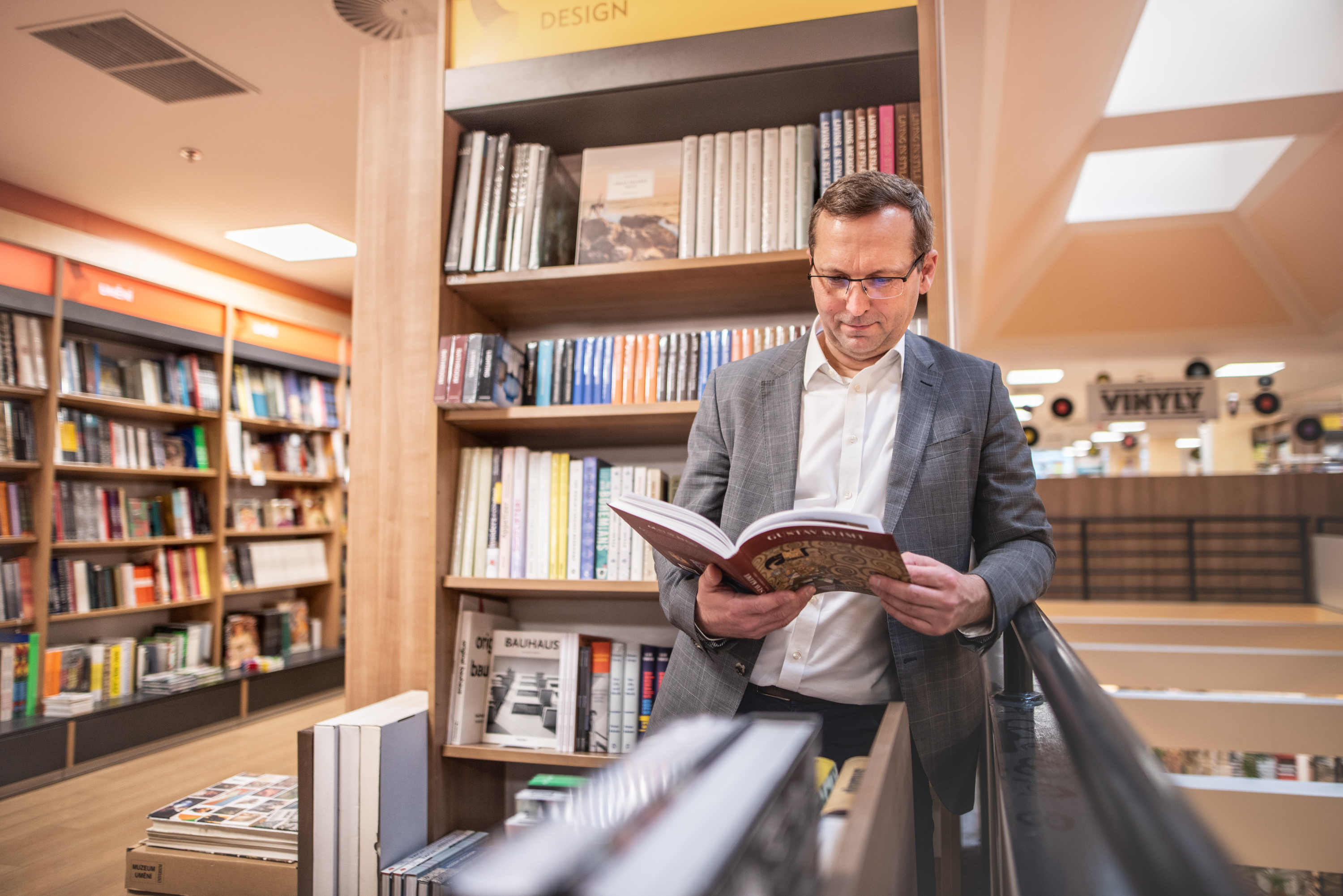 One learns from one’s mistakes. What mistake taught you the most, and what, specifically?
As every manager will probably confirm, it’s a big mistake to make compromises with regards to your team. For example, when you’re willing to tolerate insufficient character due to expert knowledge or due to the seeming indispensability of some colleague. Such trade-offs almost never pay off. Character is the only thing you can’t change. Expert knowledge can be learned, practical experience can be gained, but one’s basic character traits are formulated long before you take the job, and are usually unchanging – or at least the workplace isn’t the right place to try to change people.

Such people can have a huge negative impact. In a team that works well, positive energy is multiplied and along with it the ability to come up with new ideas and approaches. It’s important for that “positive spiral” to start turning. Mutual trust makes for better interaction between team members: they’re motivated to spend more time together and work on things together, which leads to better decisions and greater success. That, in turn, generates greater energy in the team, and so on and so forth. But this only works in a team where there is trust. When there’s a glitch in cooperation and trust, this cycle doesn’t occur. I’ve realized in similar situations that even a small compromise can eventually have a greater impact than at first glance it would seem.

What is your most important piece of advice for new entrepreneurs and start-uppers?
At one time I was a consultant, but I was never an entrepreneur as such – so I can only look at it from the perspective of a corporation, where I know very well swat its weak points are, and where there is opportunity for small companies and start-ups. You see, corporations easily lose contact with reality. People in shops and call centres know the customer, while people in offices have a tendency to create layers, hierarchies, and processes, thus moving away from customers. This creates opportunities for new players. Always, when we were working with a company that was successful, it was evident that its owners were completely connected to customer reality.

So what’s my advice? Be certain that you really know and understand your customers, have a very specific idea of what they see as added value and what they are willing to pay for it. These can even be seeming trifles. And then you need to be hard-headed. 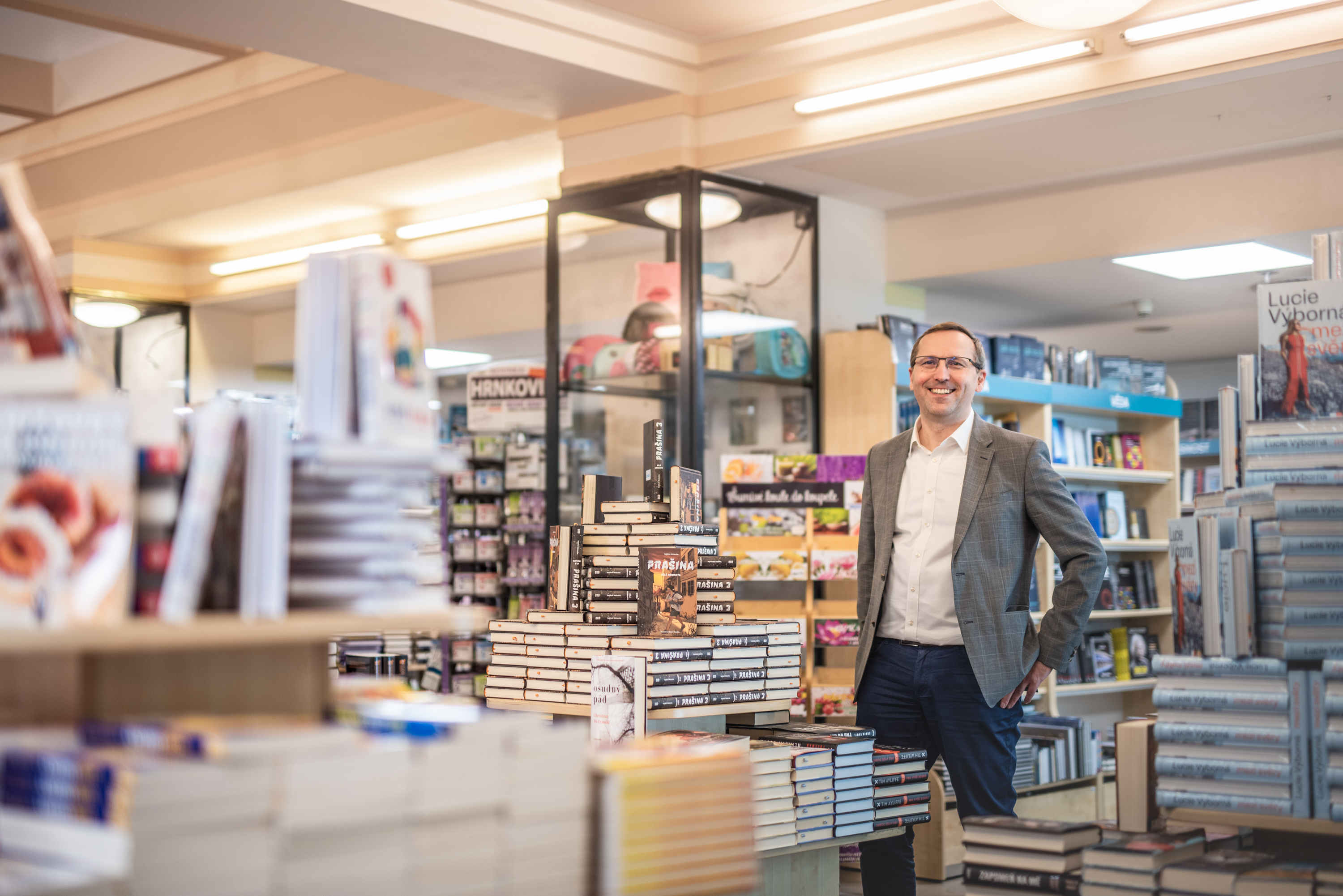 What do you consider the greatest benefit of your business for society?
With some exaggeration you could say that we sell time well spent. That’s because the book business is one of few sectors that provides huge added value just through the product alone. Reading is one of the most meaningful ways of spending time – one broadens one’s horizons and at the same one’s thoughts are transported to another world, allowing you to look at things with detachment and see the big picture.

Some companies say their vision is to change the world, and let’s face it, sometimes it’s a bit far-fetched and you’ve got to use a lot of imagination to see it. But in the case of books its clear. If, for example, you compare it with the mobile business, which basically tries to motivate people to spend more time in front of screens. In some segments, for example children, it’s already a problem… It’s great that with this kind of product we don’t have to restrict ourselves at all in sales to any customer segment. In short, the more books are sold, the better, and that goes for kids, adults, and seniors as well. Reading is good for everyone.

What question are you asked most often, and how do you answer?
People I know frequently ask me how I like the book business and whether coming to run Euromedia was a good change. I also used to get similar questions dung previous changes, when I broke with typical formulae – for example, when I moved my family to Romania for three years.

That’s how I see things – change has a refreshing effect, like when you travel to new places. I take greater notice of details that I would otherwise maybe overlook. I think that in a new environment you’re more sensitive to things. It’s an excellent opportunity to learn new things and simultaneously to apply prior experience in a new way. Simply put, sometimes it’s good to interrupt your work routine and start something new.

What life hack helps you most in your work?
What works for me is getting up really early in the morning, when everyone else is sleeping, often around 5:30 a.m. It allows me to collect my thoughts while having my morning cup of coffee or taking the dog for a walk, and to organize everything that’s waiting for me that day. I can think things through and put them into an overall idea of where I want to take them. It helps me avoid being a hostage to circumstances and instead play a more active role in forming them. In my view, time spent like this is an excellent investment. 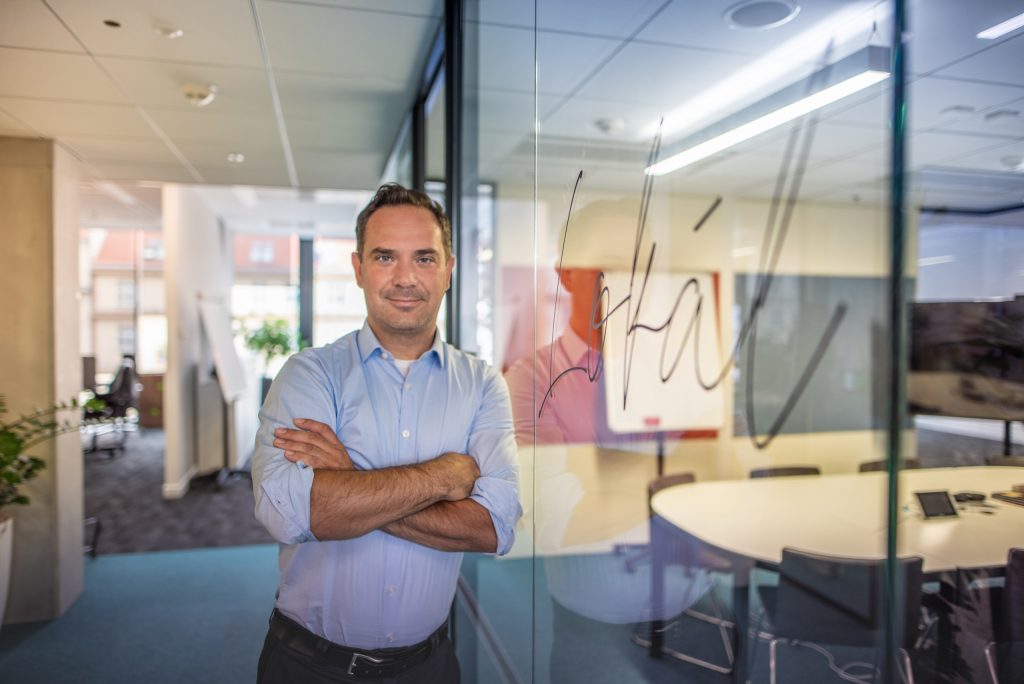 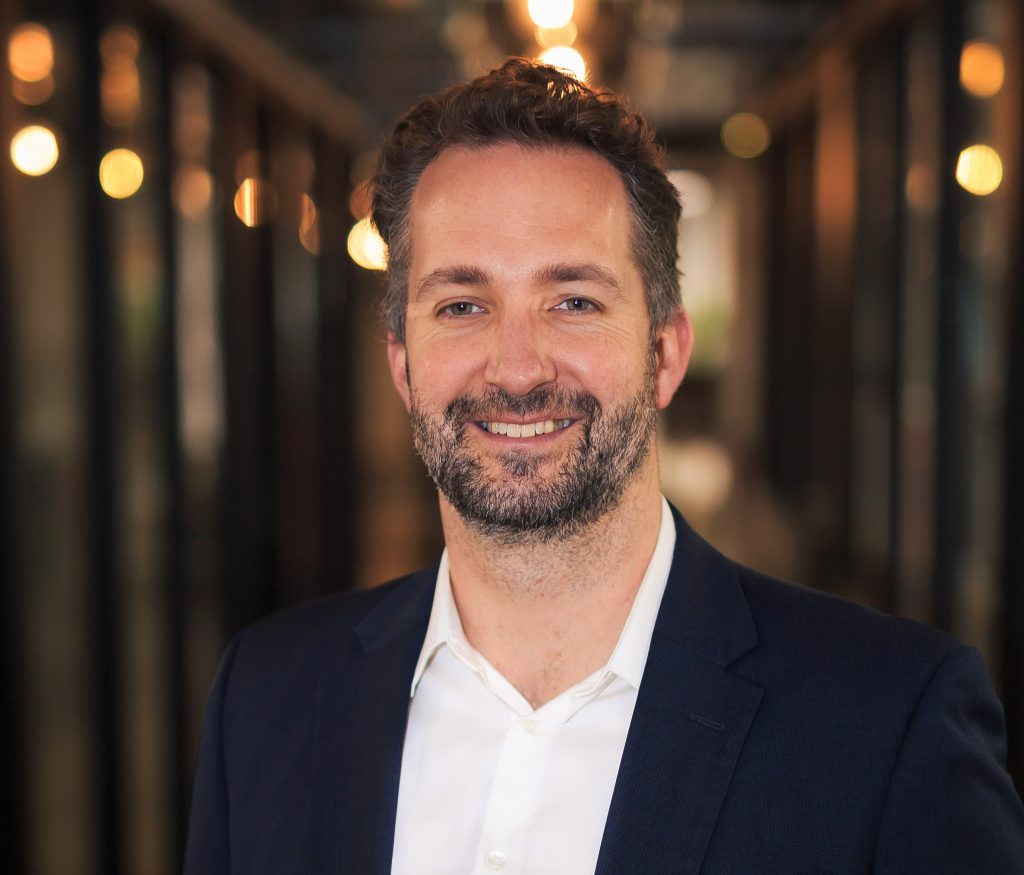