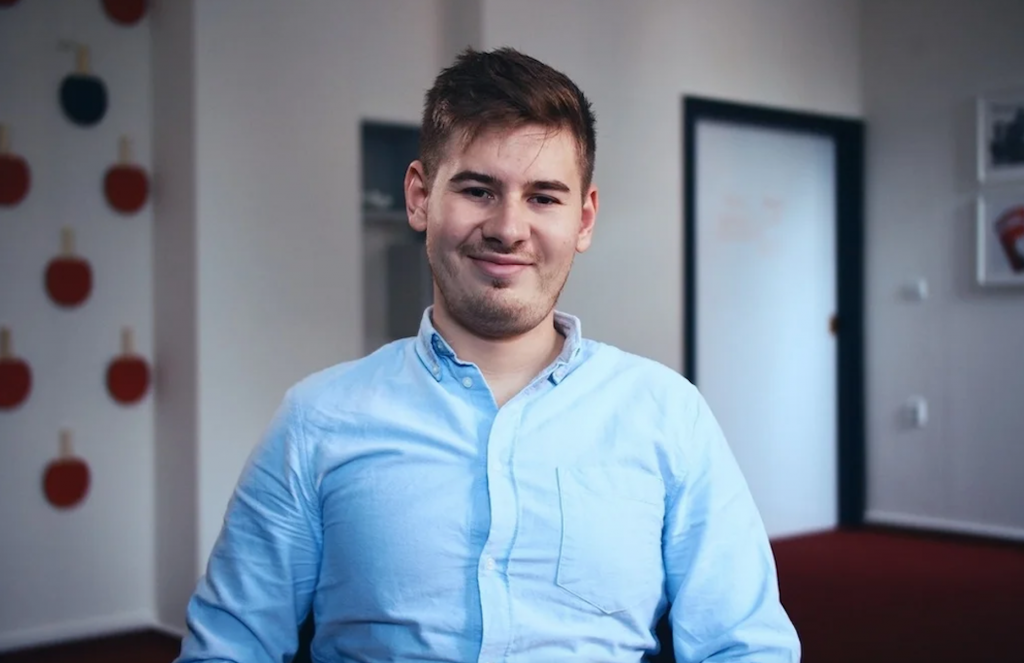 He was reluctant to answer when asked about his career path – he says that he hasn’t achieved anything all that significant. Yet, to become, at the age of twenty, the founder of a Brno start-up that today, seven years later, is the global leader in cyber-fraud detection, is definitely something unique. And it’s definitely no accident that this year Kryštof Hilar has appeared in the closely-watched “30 Under 30” ranking compiled each year by Forbes. You can read about how Kryštof thinks and how he keeps his wits about him in the fraud-prevention field in the current issue of Rockaway Insider.

Which work-related decision got you where you are today?
Life is path-dependent and every decision creates an entirely new situation that once again gives you a set of paths. By this I mean that not all decisions were mine – for example when once, long ago, my parents bought little Kryštof his first computer – and if someone had made a different decision about something, I’d most likely not even have had the right choices.
Perhaps this will sound like a cheap motivational speech, but in the beginning I really did make a conscious decision that the path of “study – find a job – start a family – make it safely to death” is unacceptable and that it definitely won’t be Kryštof Hilar’s story. And, of course, another important decision was to try my luck with AEC, where I met my future partner, Michal Tresner, who then decided to hire the then-confused Kryštof, who came by bus from a village to Brno. Well, and then it was just a question of time, of when and what kind of company we would start. Subsequent decisions, such as prematurely ending my studies at Masaryk University, were easy.

One learns from one’s mistakes. What mistake taught you the most, and what, specifically?
I’m convinced that you can’t judge the quality of a decision according to its results. And above all: when deciding to “go right” one loses access to the world that exists when you decide to “go left”. That’s why I think that the only thing you can consider to be a mistake is if you make a decision that doesn’t correspond to your goals and values – with a very short-term vision or based on emotion. If you have some sort of long-term vision, every second only one question exists: “Do what’s easy” versus “Do what’s right”. I didn’t always do what’s right, and I have a few regrets regarding all crisis situations when I took the path of stress and emotional behaviour instead of cool analysis of the facts and a rational choice of the best option or just the “easier path”. But, to be specific – we definitely thought up lots of features, which may have been validated by the customer later, but regardless of the results, it would have been better to “fail fast” more, meaning to proceed so that the mistake is as cheap as possible. I think that in the past several years were weren’t aggressive enough, because we were worried about cash flow and also didn’t want more share dilution.

Which skill do you work on because you consider it to be the most important for the future?
It’s necessary to find an appropriate compromise – to focus on maximizing your strong points and minimizing your weak ones. I’m definitely working on my soft skills, which are necessary in all contexts and scenarios, including a possible return to the Stone Age due to the current geo-political situation. The only exception could perhaps be a completely solo career, for example that of an algo-trader with his own capital – but otherwise you always need to work with people.
I’m also focusing mainly on computer science, math, and machine learning. Every few months a different framework and programming language becomes popular, but the principles weren’t created by people, which is why they don’t change. I think that currently demand is reducing the significance of the word “programmer”. Someone that only knows only the “cookbook” but not the principles could misuse the current excess demand for high margins. Companies are looking for employees and are saying to themselves: “it’s better to hire somebody rather than nobody.” I’m confident that over the long term this kind of work will be replaced by a zero-code approach and artificial intelligence, and the world will once again be ruled by a shy boy in a flannel shirt capable of creating such systems (laughter).

How can you keep your wits about you when the company is having a crisis?
I like reading and in this area I like the concept of “prioritize and execute”, something that former naval officer Jocko Willink talks about in his book Extreme Ownership: How U.S. Navy Seals Lead and Win. It’s important to keep your wits about you, to not lose sight of the big picture, to understand the situation, to pick the best sequence of actions, and to do it. I’m not saying that I always succeed, but I’ve got this process: when chaos ensues, I open an empty file and backtrack company objectives – from valuation to individual actions, and check each one whether someone from the company has it on his radar. It might sound odd, but when a crisis occurs, I actually like a situation where it’s necessary to face one “enemy”. For a while I can ignore the rest of the world and solve the problem. I think that I become this “wartime CEO” as Ben Horowitz puts it. I find people who together are capable of solving the problem, then we try to understand it, define it, find the optimum to-do list, and take action. Everybody takes a part of the tasks and we synchronize every few hours. When it’s not completely a question of life and death within an hour, I think that from a long long-term perspective it’s better to delegate entire problems and not just the task list of a final solution.

Where do you find inspiration for more ideas?
I don’t consider myself to be an especially creative person. But when I’m addressing some technical problem and run out of ideas, I go take a shower. That always works (laughter).

What is your most important piece of advice for new start-uppers?
I’d like to warn them all first. Human beings are imprecise in their thinking, and my advice will be affected by all sorts of cognitive distortions from the “I knew it” effect to predetermination. I had to mention it, Daniel Kahneman and Nicholas Taleb would wake me in my sleep if I didn’t (laughter). At any rate: in first place I’d definitely put “start with why” in the “product market fit” phase, because it’s necessary to understand the type of world in which a potential customer would be willing to spend his dollars on something. Whatever occurs to you is just a hypothesis that needs to be checked as quickly as possible. It’s easy to spend a lot of time building something using investors’ money and add more features, but that’s usually not the right choice. Next is scaling. As soon as a company starts doing that, everything scales up, including problems. A minor inefficiency turns into a major one, a little bit of chaos turns into huge chaos. In my opinion it’s extremely important to have the certainty that what we want to grow using venture funding is the right thing. In a team of five unicorns who sit in one room, work 16 hours a day, and dream of building an excellent company it’s possible to change the product overnight. When it becomes a company with a hundred people, where on top of unicorns there are also “average” employees and where everyone has only a limited context and everyone has the status quo branded on their brain, you can’t change anything anymore. So, my advice is as follows: solve a problem that has sufficient number of people have and work extremely aggressively on getting them the solution.

What was your best investment in life?
In purely financial terms, probably leveraged long trading in bitcoin during a rapid change in instrument price, which occurred sometime around 2017. But from the perspective of its influence on my life it’s insignificant, and I consider the best investments to be those involving time, thus ThreatMark’s continued “open position” and also thousands of hours of my curiosity for its own sake when I was roughly 13 to 18 years of age. I had lots of time to explore the world, write various tools, hack random services, reverse-engineer software, and find out how it all works down to the last instruction running on my Intel Q9500 (laughter).