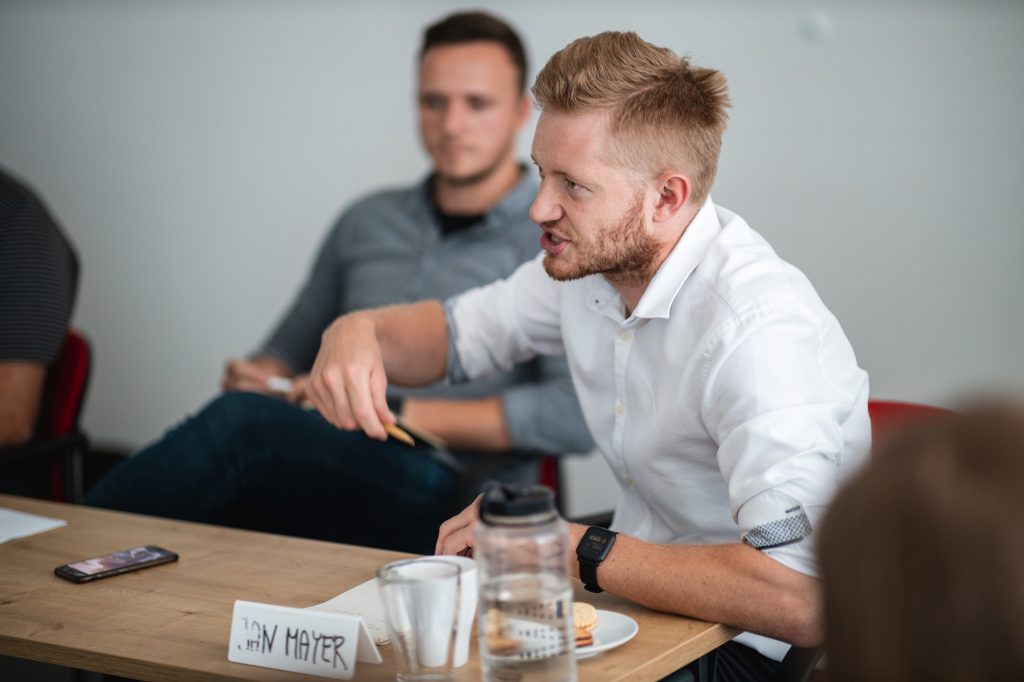 The head of the Dataweps analytics startup, which was purchased by Heureka in March of this year, laughs a lot but at the same time gives questions a lot of thought. As he himself says, he’s a nerd, something that’s corroborated by his career, which was already off to a promising start at school – he programmed components used in satellites. But paradoxically, Jan dislikes just sitting at a computer – he likes being off-line and needs to communicate with his co-workers. And as he admits, in the end children are the best life hack.

WHAT KEY THING HAS 2020 TAUGHT YOU?
Last year I was selling the company, so lots of things. (laughter) But for me 2020 was the first crisis I experienced in my work life, so it taught me to see how people react to it, as well as how we’re capable of switching to on-line completely seamlessly. Ironically, I am a big proponent of the off-line approach, I like meeting people, but I learned that things can be done on-line too. And from a purely personal perspective? Before the crisis began, I decided that I would simply be happy and content – I learned that this feeling involves a decision, not the circumstances that surround you. Lots of people don’t believe me – when someone asks me how I am, I always say that I’ve decided to be fine.

WHAT IS THE NUMBER-ONE RULE THAT YOU FOLLOW AT ALL COSTS IN YOUR BUSINESS?
I think that it’s “win-win” at all costs, meaning how can I benefit the other person, be it a client, a partner, or even an employee. On the contrary, what’s never worked for me, or even made sense to me, is the “win-lose” approach. It may sound like a cliché, pathetic, and corporate-speak, but it’s just terribly important: if you’re capable of benefiting someone somehow, it’s very fair for some sort of mutual value to be created. And if it isn’t, it’s not interesting to anyone.

ONE LEARNS FROM ONE’S MISTAKES. WHAT MISTAKE TAUGHT YOU THE MOST, AND WHAT, SPECIFICALLY?
I’ve made lots of mistakes, of course, and they’ve all been excellent ones. (laughter) But my biggest mistake was hiring someone what was such a perfect mismatch that it wrecked a lot of things in the company. It taught me that there can be people whose thinking is so diametrically opposed to what I can even imagine, so it actually really broadened my horizons.

WHAT IS YOUR MOST IMPORTANT PIECE OF ADVICE FOR NEW ENTREPRENEURS AND START-UPPERS?
I tend to ask questions and try to understand rather than going around dispensing advice. But from my own experience, it seems very important to me that people are honest with each other, dig deep, know why they’re doing something and what they want to achieve. That because if you know these things you don’t have to search for some PR justification for your idea that will then look good at Czechcrunch. That’s because when the going gets tough you might give up on your idea because the desire to do something new wasn’t that strong, and was a mere “nice-to-have”.
And the second piece of advice – which I try to follow too – is to think positively, that things will end up well, but at the same time face the harshest reality and the situation as it is now. If one or the other is missing, you either have your head in the clouds, because you’ll say to yourself: “It’ll work out somehow, it’ll be fine,” or on the contrary you’ll be all depressed, thinking you don’t stand a chance.

WHAT DO YOU CONSIDER THE GREATEST BENEFIT OF YOUR BUSINESS FOR SOCIETY?
At Dataweps we want to help people so they don’t have to do routine, normal, repetitive work that can be automated – it simplifies things greatly for clients. At the same time, education was always an added value for us; lots of people have passed through our company, people who we helped grow and go places. We also taught at Masaryk University, where we participated in several subjects to show how it all works in practice. And we also worked with the Czechitas Digital Academy.
Because we’re B2B and not B2C, the benefits of Dataweps is relatively limited and applied primarily to our clients. The impact of Heureka is much greater. People are already seeing it as a standard, but don’t realize that their rating of e-shops immensely accelerated the Czech e-commerce ecosystem, which is now much healthier. “Verified by Customers” pushes shops to provide better service, which brings me back to the win-win approach. For sellers, Heureka is an effective and functional channel, without which many of them would have great problems operating. That’s because it’s much simpler to have content on Heureka than learning PPC, then you’ve got Facebook ads, and so on.
Heureka is also unique in its emphasis on company culture, how it treats its employees, how it sets values for them. This kind of benefit for society is the least visible, but is of the utmost importance – Heureka is setting the example, that such behaviour is correct, but it also has financial benefits. That’s something that also aligns with my values and with how one should treat people in business.

WHAT QUESTION ARE YOU ASKED MOST OFTEN, AND HOW DO YOU ANSWER?
I actually answered that at the beginning. The questions everyone asks me most often is how I am. And I answer that I’m fine, because I’ve decided to be. (laughter)

WHAT LIFE HACK HELPS YOU MOST IN YOUR WORK?
I go to bed before ten in the evening. Exercise, adaptive cruise control, and AirPods so I can talk on the phone while walking also help. So do audio books, because I don’t have to strain my eyes and can just listen. And the latest life hack that I’ve been using for only a week now, is that on my phone, in the spot I usually clicked on Chrome, where one goes automatically by now, I’ve added an audio book icon – so I click and continue reading. And I also don’t work when I at home; I admit that this is something my kids forced me to do. They’re this one big life hack. They make you slow down, and divert your attention from the digital world to them. They stick their head in front of your face, grab you by the ears, and say: “Dad, look at me.” (laughter)